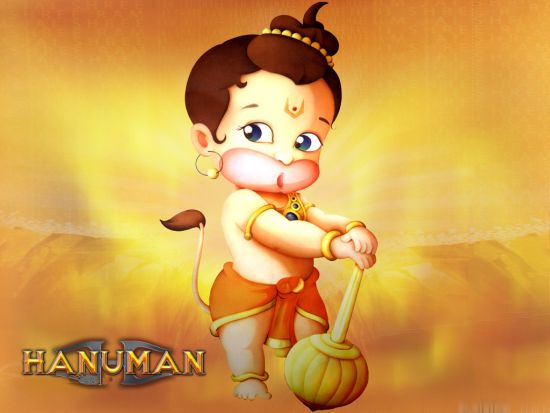 Hanuman Jayanti or Hanuman Janma Utsav is a very important Hindu festival dedicated to Lord Hanuman. It celebrates the birth of Lord Shri Hanuman who is immensely worshipped throughout India and Nepal.

The festival is usually celebrated on different days in various parts of India.

Hanuman Jayanti is mostly celebrated in the month of Chaitra on the day of Chaitra Poornima.

However, it is also celebrated in the month of Vaishakh.

In the few of the Indian states such as Kerala and Tamil Nadu, Hanuman Jayanti is celebrated in the Hindu month of Dhanu which is known as Margazhi in Tamil.

On the special day of Hanuman Jayanti, devotees celebrate Lord Hanuman and seek his protection and his divine blessings. They visit Hanuman temples and present religious offerings to him.

In return, they receive Prasad in the form of sweets, flowers, coconuts, Tilak, and Ganga Jal. Devotees also recite various devotional hymns and prayers like the Hanuman Chalisa and go on to read Holy Scriptures like the Ramayana and Sunder Kanda.

Hanuman Jayanti has been regarded as a very important festival related to Lord Hanuman. It goes on to celebrate the birth anniversary of Lord Sri Hanuman.

In fact, Lord Hanuman is an ardent devotee of Lord Rama is widely acknowledged for his endearing devotion to Sri Rama.

He is the symbol of strength, courage, and devotion. Lord Hanuman is widely worshipped as a deity who protects and safeguards the devotees in any difficult circumstances whatsoever.

According to Hindu religious scriptures, Lord Hanuman is said to be born on the Anjaneri Mountain. He was born to Kesari and Anjani.

Lord Hanuman is also known as Anjaneya and Kesari Nandan.

It is said that his mother was an Apsara who was born on earth due to a curse. According to a divine omen, Anjani would be redeemed from the curse when she gives birth to a son.

His father Kesari was the son of Brihaspati and the King of a place called Sumeru.

It is said that Anjani prayed for 12 long years to Lord Shiva to get a son. Lord Shiva was pleased with their devotion and granted them the son they sought.

According to another interpretation, Lord Hanuman is believed to be the eleventh incarnation of Lord Shiva himself.

According to some Hindu scriptures, Lord Hanuman is also regarded as the son of Vayu Deva, the Wind God. There was a major role of Vayu Deva in the birth of Lord Hanuman.

Bhavartha Ramayana mentioned that when Anjani was worshipping Shiva, Dasharatha, the King of Ayodhya, was performing a Putrakamna Yagna for having children.

As a result of the Putrakamna Yagna, he received a sacred pudding that was shared among his three wives that lead to the births of Rama, Lakshman, Bharat, and Shatrughan.

As divine ordinance would have it, a kite snatched a portion of that pudding and dropped it over the forest where Anjani was worshiping Lord Shiva.

Vayu Deva, the Wind God, then delivered that pudding to the outstretched hands of Anjani. She consumed that pudding and gave birth to Hanuman as a result.

According to another tradition, Anjani and Kesari prayed to Lord Shiva for a child. Vayu Deva transferred the male energy of Lord Shiva to Anjani’s womb, and Hanuman was born as a result.

Accordingly, Hanuman is said to be the son of Vayu Deva and hence is also known as Pawanputra.

There is also another very interesting story relating to the birth of Lord Hanuman.

It has been described in Vishnu Purana.

Once, Narada was infatuated with a princess and wanted to marry her. So, he went to Lord Vishnu and requested to grant him a look like Vishnu, so that the princess would garland him at the swayamvara.

He asked for Hari Mukh.

However, Vishnu bestowed him with the face of a vanara.

Narada was unaware of this and went to the princess. The princess burst into laughter on seeing the face of Narada and rejected him.

Narada became very angry at this and cursed Vishnu that he would become dependent on a vanara.

Lord Vishnu told Narada that he had done this for his good as entering into matrimony would have undermined his powers. He also noted that another meaning of “Hari” in Sanskrit was vanara.

When Narada heard this, he repented of cursing Vishnu.

However, Lord Vishnu consoled Narada by saying that the curse would lead to the birth of Hanuman, who would help Rama, an avatar of Lord Vishnu, in killing the demon king Ravana.

How is Hanuman Jayanti Celebrated?

The Hanuman Jayanti celebrations begin early in the morning.

A special “Abhishek” is performed for the deity of Hanuman.

After the Abhishek, the idol of Hanuman is adorned with special Alankara having butter and dry fruits. A garland made out of vada (urad dhal) is also offered.

The devotees visit Hanuman temples and apply Tilak of Sindoor to the forehead of the idol of Lord Hanuman.

According to Hindu legends, Lord Hanuman likes to smear his entire body with Sindoor that will ensure the immortality of his beloved Lord Rama.

The devotees read the Hanuman Chalisa and shlokas related to Lord Hanuman.

In South India and particularly in Tamil Nadu, Hanuman Jayanti is celebrated in the Margazhi month of Moola Nakshatra. It is said that Lord Hanuman was born in this month.

In states such as Telangana and Andra Pradesh, Hanuman Jayanti is celebrated beginning on Chaitra Poornima. The celebrations continue till the tenth day during Krishna Paksha of Vaishakh month.

In states such as Maharashtra, Hanuman Jayanti is celebrated on the full moon day of the Chaitra month in the Hindu calendar.

So, Hanuman Jayanti is celebrated with immense devotion all throughout India.

Hanuman Jayanti will be celebrated on full moon day in the Chaitra month. It is celebrated to commemorate the birth of Lord Sri Hanuman.

In 2020, Hanuman Jayanti will be celebrated on 8th April 2020, Wednesday. Lord Hanuman is considered as the eleventh Rudra avatar of Lord Shiva. He is an ardent devotee of Sri Rama and Mata Sita.

Here, we share with you some of the images related to Hanuman Jayanti. It is a very important Hindu festival celebrating the birth anniversary of Lord Sri Hanuman. You will come to know how Hanuman Jayanti is celebrated.

In fact, Hanuman Jayanti is celebrated with immense devotion all throughout India, particularly in the states of Tamil Nadu, Andra Pradesh, Maharashtra, Madhya Pradesh, and Uttar Pradesh.

We hope that this presentation will prove an indispensable resource on Hanuman Jayanti. Herein, we have shared the birth story of Lord Hanuman and have described how Hanuman Jayanti is celebrated.

If you liked the post, please share it with your friends and loved ones. We welcome your comments and suggestions.