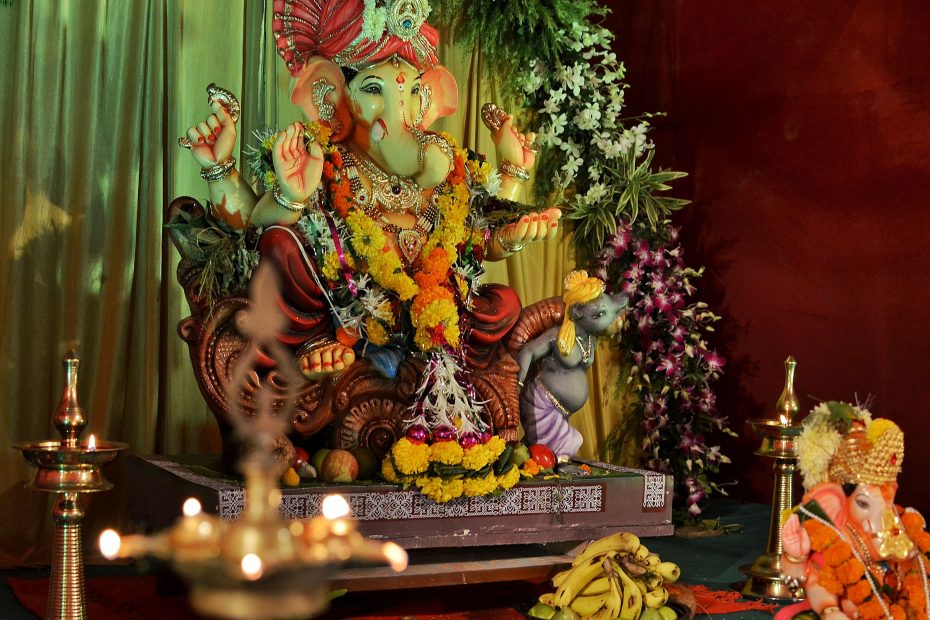 The date of Ganesh Chaturthi falls on the fourth day of the waxing moon period (Shukla Chaturthi) in the Hindu month of Bhadrapada. This is August or September each year. The festival is celebrated for 10 or 11 days according to the Hindu lunar calendar, with the biggest spectacle taking place on the last day called Anant Chaturdasi.

Watch Now: What is Ganesh Visarjan?

Ganesh Chaturthi commemorates the birthday of Lord Ganesh. On this day, beautiful handcrafted idols of the Lord are installed both in homes and in public. Prana Pratishtha is performed to invoke the power of the deity into the idol, followed by a 16 step ritual known as Shodashopachara Puja. During the ritual, various offerings including sweets, coconuts, and flowers are made to the idol. The ritual should be performed at an auspicious time around midday, known as Madhyahna, when Lord Ganesh is believed to have been born. It’s important, according to tradition, not to look at the moon during certain times on Ganesh Chaturthi. If a person sees the moon, they’ll be cursed with accusations of theft and dishonored by society unless they chant a certain mantra. Apparently, this came about after Lord Krisha was falsely accused of stealing a valuable jewel. Sage Narada said that Krishna must’ve seen the moon on Bhadrapada Shukla Chaturthi (the occasion that Ganesh Chaturthi falls on) and was cursed because of it. Furthermore, anyone who saw the moon then would be cursed in a similar way.

The idols of Lord Ganesh are worshiped every day, with an aarti in the evening. The largest Ganesh statues, on display to the public, are usually taken out and immersed in water on Anant Chaturdasi. However, many people who keep an idol in their homes carry out the immersion much before this.

What is the Significance of Anant Chaturdasi?

You may be wondering why the immersion of Ganeshi idols concludes on this day. Why is it special? In Sanskrit, Anant refers to eternal or infinite energy, or immortality. The day is actually devoted to the worship of Lord Anant, an incarnation of Lord Vishnu (the preserver and sustainer of life, also referred to as the supreme being). Chaturdasi means the “fourteenth”. In this case, the occasion falls on the 14th day of the bright half of the moon during the month of Bhadrapada on the Hindu calendar.

The festival takes place on a grand scale in Mumbai. This Guide to Ganesh Chaturthi in Mumbai contains all the details. Don’t miss these 5 Famous Mumbai Ganesh Mandals.