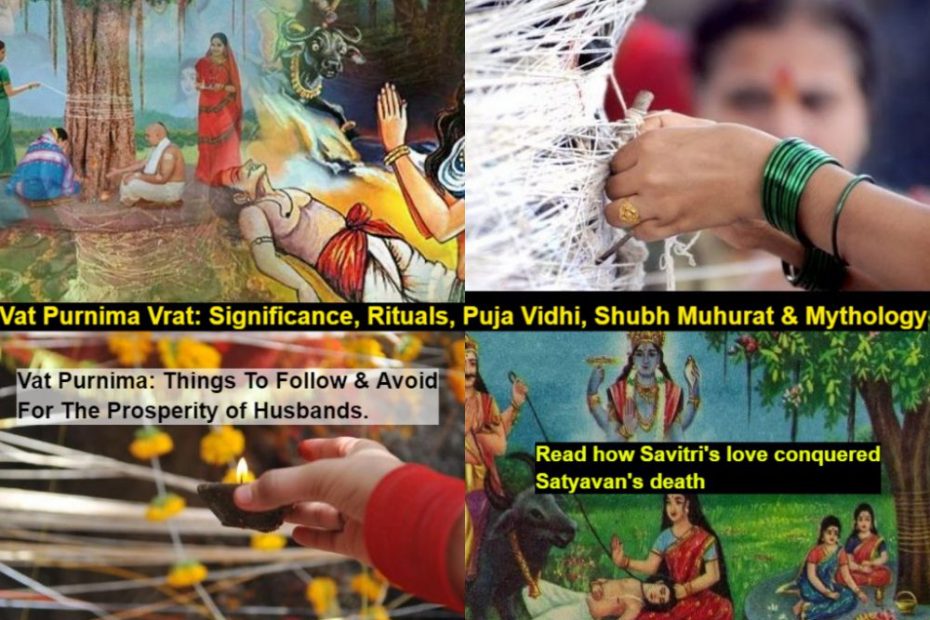 What is Vat Purnima? Why is it celebrated? What does the festival signify? Read its mythology/legends, significance, Puja Muhurat and rituals to follow

Vat Purnima is an important observance for married Hindu women. Also know as Savitri Vrat, it is a day to celebrate a woman’s love for her husband in the Indian states of Gujarat, Maharashtra, Karnataka and Some regions of eastern Uttar Pradesh.

Women observe a fast and tie threads around a banyan tree and pray for the same husband in every birth. The celebration derived from the story of Savitri and Satyavan.

Vat Savitri Puja is performed by married women for the longevity, well-being, and prosperity of their husbands. It is considered as a symbol of love and devotion by the wife to her husband. Traditionally, the festival is celebrated for three days and three nights. Now, women observe fast and perform puja only on the main ritual day – Jyestha Amavasya or Jyestha Purnima.

Banyan tree represents ‘Trimurtis’ – Brahma, Vishnu, and Shiva. Further elaborated as – Brahma the root, Vishnu the stem and Shiva the rest of the tree. The entire tree symbolizes ‘Savitri’.

* In old times, there was a tradition to observe fast three days before the actual festival. Now a days, women fast only on Vat Savitri Purnima or Amavasya.

* Women wake up early, take a bath and adorn themselves with jewelleries.

* Married women dress in fine sarees and jewelry, and their day begins with the offering of any five fruits and a coconut.

* All Women move together to offer prayers to the Banyan tree and each woman winds white thread around a banyan tree seven times as a reminder of their husbands. This ritual means that the woman wants the same husband in all her seven lives

* Ganga water is poured and threads of red and yellow colour are tied around the tree chanting prayers.

* A brahmin narrates the story of Savitri and Satyavan. Fruits and soaked pulses are offered as bhog.

* After completing all the rituals women seek blessings of their husbands and elder members of the family. There is also a tradition to donate food, clothes, and money.

The mythology of Savitri and Satyavan

According to the legends, an honest king – Ashwapati – worshipped Goddess Savitri and asked for a daughter as a boon. When the daughter was born, he named her Savitri after the goddess. When the king wanted to get Savitri married, they wanted to settle for Satyavan. However, the priests predicted that Satyavan would only live for another year. They also said that he would soon lose his kingdom. Savitri would not let that information stop her and insisted on marrying Satyavan.

After a year of happy marriage, when it was time for Satyavan to die, Yamaraj – the Death god – came to take him away. Savitri refused to let go of her husband and started following Yamaraj on his way to Yamlok when he took Satyavan with him. Savitri didn’t stop despite constant reminders that no mortal can reach Yamlok alive. Yamraj then offers three boons to her and she asks for her husband’s kingdom and her in-laws’ prosperity. For the third boon, she asks for a child. After Yamraj agrees to all her requests, Savitri reminds him that she has been a loyal wife and without Satyavan, the Death God’s boon (of her getting her own child) would prove to be fake. It was then that Yamraj had to spare Satyavan’s life.

What does the festival signify?

This auspicious festival celebrates Savitri’s loyalty and dedication for her husband and the women observing the fast hope to achieve similar qualities and wish for a better and longer life for their husbands.