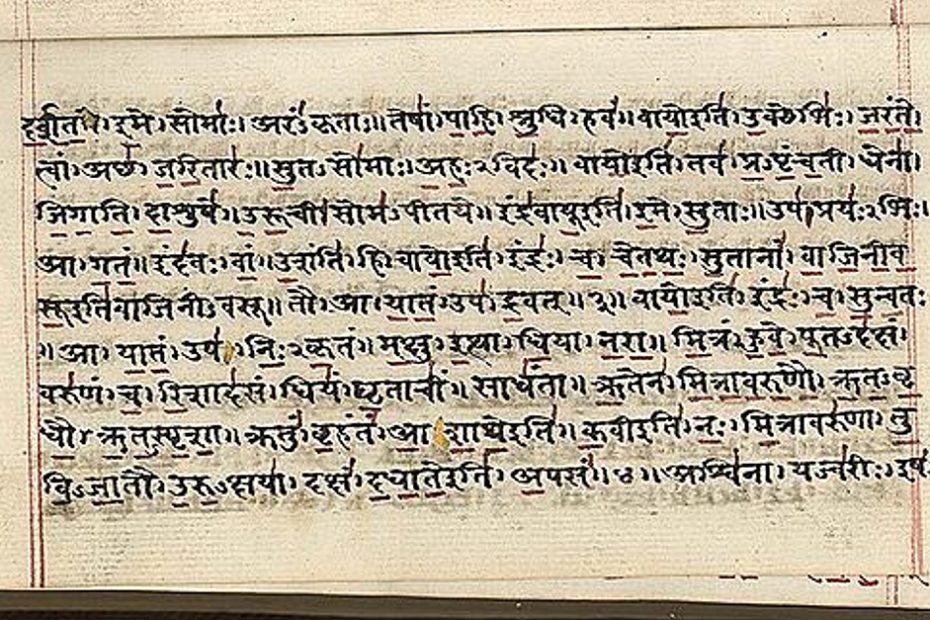 The Vedas are a collection of hymns and other ancient religious texts written in India between about 1500 and 1000 BCE. It includes elements such as liturgical material as well as mythological accounts, poems, prayers, and formulas considered to be sacred by the Vedic religion.

Origin & Authorship of the Vedas

The origin of the Vedas can be traced back as far as 1500 BCE, when a large group of nomads called the Aryans, coming from central Asia, crossed the Hindu Kush Mountains, migrating into the Indian subcontinent. This was a large migration and used to be seen as an invasion. This invasion hypothesis, however, is not unanimously accepted by scholars today. All we know for certain, mainly through linguistic studies, is that the Aryan language gained ascendency over the local languages in the Indian sub-continent. The language of the Vedas is Sanskrit, an ancestor of most of the modern languages spoken today in South Asia.

We do not know much about the authors of these texts: In Vedic tradition the focus tends to be on the ideas rather than on the authors, which may allow one to look at the message without being influenced by the messenger. Vedic literature is religious in nature and as such tends to reflect the worldview, spiritual preoccupations, and social attitudes of the Brahmans or priestly class of ancient India. The Vedas were first composed sometime around 1500-1000 BCE in the north-western region of the Indian subcontinent – present-day Pakistan and northwest India – and they were transmitted orally over many generations before eventually being committed to writing. Like the Homeric epics, parts of the Vedas were composed in different periods. The oldest of these texts is the Rig-Veda, but it is not possible to establish precise dates for its composition. It is believed that the entire collection was completed by the end of the 2nd millennium BCE.

The basic Vedic texts are the Samhita “Collections” of the four Vedas:

In general, the Vedas have a strong priestly bias, as the priestly class had the monopoly in the edition and transmission of these texts. by Metropolitan Museum of Art (Copyright)

The Rig-Veda is the largest and most important text of the Vedic collection; it includes 1028 hymns and it is divided into ten books called mandalas. It is a difficult text, written in a very obscure style and filled with metaphors and allusions that are hard to understand for modern reader. The Sama-Veda has verses that are almost entirely from the Rig-Veda, but are arranged in a different way since they are meant to be chanted. The Yajur-Veda is divided into the White and Black Yajur-Veda and contains explanatory prose commentaries on how to perform religious rituals and sacrifices. The Atharva-Veda contains charms and magical incantations and has a more folkloristic style.

The Vedas present a multitude of gods, most of them related to natural forces such as storms, fire & wind.

Some elements of the religion practised by the natives of India before Vedic times still persist in the Vedas. The Pre-Vedic religion, the oldest known religion of India, which was found in India before the Aryan migrations, was apparently an animistic and totemic worship of many spirits dwelling in stones, animals, trees, rivers, mountains, and stars. Some of these spirits were good, others were evil, and great magic skill was the only way to control them. Traces of this old religion are still present in the Vedas. In the Atharva-Veda, for example, there are spells to obtain children, to avoid abortion, to prolong life, to ward off evil, to woo sleep, and to harm or destroy enemies.

Despite the fact that the Rig-Veda deals with many gods, there are some who get a lot of attention. More than half the hymns invoke just three top-rated gods of the moment: Indra (250 hymns), Agni (200 hymns), and Soma (just over 100 hymns).

Indra was the head of the ancient Hindu pantheon. He was the Storm-god (sometimes he is referred to as the Sky-god and also as the god of war). The Vedas describe Indra as the god “Who wields the thunderbolt”, and his most celebrated story was the killing of the demon-serpent Vritra. The legend says that Vritra kept all the waters trapped in his mountain lair, and Indra was the one who slew the demon in order to release the waters.

I have grown mighty through my own great vigour;

I am the hurler of the bolt of Thunder

This story has a deep significance: The waters are vital for the health of any human community where agriculture is understood as the basis of wealth. By hoarding the waters, the serpent has upset the natural order, preventing the circulation of wealth and nourishment. Indra must thus do battle to restore the balance.

He, who slew the Dragon, freed the Seven Rivers, and drove the

kine forth from the cave of Vala,

Begat the fire between both stones, the spoiler in warrior’s battle,

Even the Heaven and the Earth bow down before him, before his

Known as the Soma-drinker, armed with thunder, the wielder of the bolt,

Soma was the personification of the sacred soma plant, whose juice was holy and intoxicating to gods and men. Agni, the god of fire, is often referred to in Vedic literature as the most important god, and is considered to be the flame that lifts the sacrifice to heaven, a symbol of the fiery life and spirit of the world, the “vital spark”, the principle of life in animate and inanimate nature. Agni was seen as a sort of messenger between the realm of the living and the realm of the dead. Cremation was believed to prevent the spirit of the dead from remaining among the living, and for this reason, worshippers of Agni burned their dead, and Agni was responsible for transporting the soul of the dead. Another important deity is Varuna, who was initially associated with heaven. Varuna eventually developed into the most ethical and ideal deity of the Vedas, watching the world through his great eye, the sun, and was thought to know everything, to enforce justice and to preserve the world’s smooth functioning. Varuna was also the executor and keeper of the eternal law known as Rita. This was at first the law that established and maintained the stars in their courses; gradually it became also the law of right, the cosmic and moral rhythm which every human must follow to avoid the celestial punishment.

The Vedas also have a hymn to Purusha, a primordial deity who is sacrificed by the other gods: Purusha’s mind became the Moon, his eyes the Sun, his head the Sky, and his feet the Earth. In this same passage we have one of the first indications of a caste system with its four major divisions:

Myths are products of beliefs, and beliefs are products of experience. This story reflects the concerns and experiences of a community based on agricultural lifestyle, where water is seen as one of the most valuable assets. Myths with an agricultural significance are found in many other cultures and dragon-slaying myths are told all over the world, especially in many other Indo-European traditions.

During Vedic times, it was widely believed that rituals were critical to maintain the order of the cosmos and that sacred ceremonies helped the universe to keep working smoothly. In a sense, ceremonies were seen as part of a deal between humans and the gods: Humans performed sacrifices and rituals, and the gods would return their favour under the form of protection and prosperity.

A new set of texts, known as the Brahmanas, was attached to the Vedic collection around the 6th century BCE.

Nature, however, remains indifferent to religious rituals, so when events went awry, society blamed the priests’ incompetence. Priests were not willing to admit their helplessness in trying to master nature and would say that the gods ignored poor quality offers. The solution, the priests said, required more royal support. Brahman priests refused to have their privileges cut, so they developed a new literature which specified, sometimes in a very detailed way, how rituals had to be performed, the precise quantity and quality of material to be used, and the exact pronunciation of sacred formulas. This new set of texts, known as the Brahmanas, was attached to the Vedic collection around the 6th century BCE. The priests claimed that if sacrifices were performed exactly as they said, then the gods would be compelled to respond. When these new rituals also proved to be useless, many sectors of Indian society believed that this whole business of ritual and sacrifice had been taken too far.

During the later Vedic period (from c. 800 to c. 500 BCE), the priestly class was seriously questioned. The rituals, the sacrifices, the detailed rulebooks on ceremonies and sacrifices, all of these religious elements were being gradually rejected. Some of those who were against the traditional Vedic order decided to engage in the pursuit of spiritual progress, living as ascetic hermits, rejecting ordinary material concerns and giving up family life. Some of their speculations and philosophy were compiled into texts called The Upanishads. A number of practices were linked to this new spiritual approach: meditation, celibacy, and fasting, among others.

Around the 7th century BCE, India saw the growth of a culture of world-renunciation, which was a reaction against the Vedic tradition. This culture is the common origin of many Indian religions considered to be “heretical” by the Indian traditional priestly class. Charvaka, Jainism, and Buddhism, among other movements, originated around this time, encouraged by the gradual decay of the priestly orthodoxy. This would result in the end of the Vedic hegemony, shifting the focus of religious life from external rites and sacrifices to internal spiritual quests in the search for answers.

The authority of the Vedas eventually diminished to give way to a new religious synthesis in India that would dominate Indian society for the centuries to come.