Rig Veda: Everything About Rigveda The Ancient Hindu Text 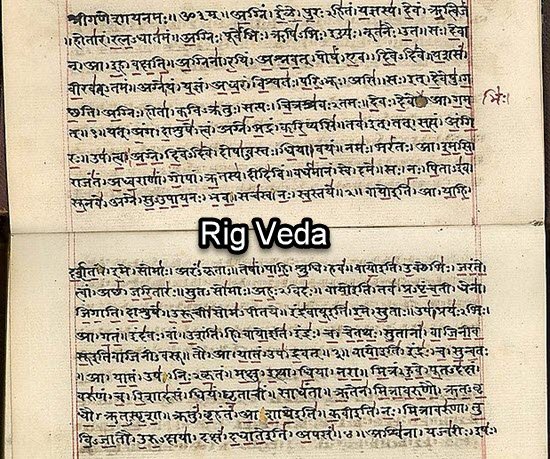 Rig Veda is most popular among all Vedas; today we will share some useful information related to Rigveda which every Indian must know.

The Vedas are recognized as the most sacred scriptures of the Hindus. In fact, the Vedas have the status of being the world’s oldest piece of literature.

The word “Veda” has been derived from the root word ‘vid’ which means wisdom, knowledge, or vision. So, Vedas describe spiritual knowledge encompassing all aspects of life.

The Vedic text has stood the test of time and is still regarded as the highest religious authority by Hindus in particular and humankind in general.

Vedas are four in number. These are:

Today, you come to know everything about The Rig Veda. The Rigveda is regarded as the oldest text of Hinduism. It is the oldest of the four Vedas.

In fact, the Rig Veda is the oldest book known to humanity. The Rig Veda has been described as having the origin of divine knowledge.

The Rig Veda consists of Sanskrit hymns with commentaries on liturgy, ritual and mystical exegesis. The core part of Rig Veda is known as Rig-Veda Samhita.

It contains 1028 hymns (Sukta) in about 10,600 verses. It is organized into ten books known as “Mandalas.” Most of these contain praises of specific deities.

They also deal with philosophical questions and bring out the virtue of Dana (charity) in society. They even take other metaphysical issues in their hymns.

It is believed that the bulk of Rig-Veda Samhita was composed as early as 1500 BC.

Mandalas 2 – 7 form the oldest part of the Rig-Veda Samhita and account for 38% of the entire text. Each of them has been attributed to an individual Rishi.

They were transmitted within the lineage of the Rishi’s family or his students. It deals with a particular deity such as Agni and Indra.

Each Mandala contains hymns or Sukta that are intended for various rituals. The Sukta, in turn, consist of individual stanzas (units of verse) called as Pada.

Overall, the Rigveda deals with many Gods. However, there are some who get much attention.

The Vedas describes Indra as the head of the ancient Hindu pantheon. He has been described as the God of War.

The Agni is considered as the most important god in Vedic literature and is responsible for lifting the sacrifice to heaven.

The Soma was regarded as the personification of the sacred soma plant whose juice provides immortality to gods.

It is said that many ‘rishis’ have contributed to the Rig Vedic text. The important ones among these (known as the seven primary seers) are Atri, Vishwamitra, Vasishtha, Gautam, Jamadagni, Kanwa, and Bharadwaja.

Altogether the Rig Veda consists of:

What is Meant by Rig Veda?

The “Rig Veda” stands out to be one of the four canonical sacred texts of Hinduism that are collectively known as the Vedas.

In fact, the “Rigveda” is the oldest of the four Vedas that includes “Yajur Vedas,” “Sama Veda,” and “Atharva Veda.”

The “Rig Veda” contains Sanskrit hymns that are dedicated to Rig-Vedic deities.

Rigveda has been organized in 10 books that are known as Mandalas.

The Rig Veda outlines many spiritual disciplines and provides information about the practice of yoga, meditation, mantra, and Ayurveda.

Many mantras in Rigveda are hymns to the gods praying for benefits like health, wealth, and long life.

The main ones include: Indra, Agni, and Soma.

Apart from these main gods, the Rig Veda has mentioned for Adityas, Varuna, Usha, Brihaspati, Rudra, Savitr, and Vishnu.

Originally, the mantras were recited during religious rituals. It was the main way for people to communicate with God.

The Rig Veda is not the work of any single author. The Rig Veda was composed by our great “Rishis” (ancient sages).

Initially, the Rigveda was not written; rather it was composed orally and transmitted from one generation to other through precise oral tradition.

Moreover, it is said that different Rishis composed rig Vedic hymns or Sukta.

It is believed that as much as 329 males and 27 females (Rishikas) contributed towards the Rig Veda.

So, credit cannot be given to a single person for composing or writing Rig Veda.

Veda Vyasa (compiler of the Veda) was the sage who collected and compiled these hymns in the form of Vedas including the Rig Veda, as we know it today.

Who is the main God in the Rig Veda?

There are as much as 1028 hymns in the Rig Veda. Most of them have been dedicated to specific deities.

Indra (the God of War) holds much prominence in the Rigveda. He is described as the slayer of Vritra. Indra has been called as the liberator of cows and the rivers. He is the one who destroyed the Vala.

Agni finds a vivid description in the Rig Veda. It is described as the sacrificial fire and the messenger of the Gods.

Soma is the personification of the sacred soma plant whose ritual drink provides immortality to Indra and other prominent deities.

The Rig Veda also invokes other Gods such as the Vishvedevas, the Maruts, the Ashwins, Surya, Mitra, Varuna, Aditi, Bhaga, Ansa, and Daksha.

The Rig Veda even refers to various natural phenomena in the form of Vayu (the wind), Dyaus and Prithvi (Heaven and Earth), Usha (the dawn), and Apas (the waters).

Rivers are deified as Goddesses. The Rig Veda has mentions of the Sapta Sindhu and the Saraswati River.

Yama is worshiped as the God of the underworld and death. Vishnu and Rudra (an early form of Shiva) are present as marginal Gods.

How old is the Rig Veda?

However, Rigveda was not written in one go. It’s a work by different sages (Rishis) over centuries. It was initially transmitted orally from one generation to other.

Later on, it was collected and compiled by Veda Vyasa. Its date is debatable.

According to astronomical references found in the hymns of Rig Veda, it can be assumed that Rigveda must have been as old as 4000 BCE. Some scholars date it as early as 12000 BCE.

However, most modern western scholars are of the opinion and date Rig Veda to about 1500 BCE.

Why is the Rig Veda Important?

The Rig Veda is regarded as the most important religious texts of the Hindus. It contains “sacred knowledge” and believes about the Hindu religion. It has more than 1000 hymns dedicated to the gods and natural forces.

The Rig Veda is all about divine revelations received by ancient sages about divine truth or supreme knowledge. It contains the very basis of Sanatan Dharma.

Originally, Rigveda was transmitted orally from one generation to other. Later on, it was compiled and written down in the text form, as we know it today.

The Rigveda has been organized in the form of ten books called as Mandalas. Each Mandala is associated with a certain deity. There are hymns praising gods and asking for benefits such as health, long life, wealth, protection, and victory in battle.

These mantras were chanted in all religious rites. It was the primary way for the people to communicate with the gods.

Moreover, Rig Veda is considered to be the foundation of the Hindu religion. It is an important source of Hindu mythology containing descriptions about various Hindu Gods such as Indra, Agni, Varuna, Surya, Rudra, Vishnu as well as many other Hindu deities.

What is Rigveda all about?

The Rig Veda contains 1028 hymns and as much as 10600 verses that have been written down in the form of ten Mandalas. These hymns are primarily dedicated to various Vedic Hindu Deities such as Indra, Agni, Soma, Varuna, Adityas, Vayu, Surya, Savitr, Rudra, Vishnu, and Brihaspati.

The 10 Mandalas have been grouped as follows:

Mandala 1: It is primarily dedicated to Indra and Agni. Varuna, Surya, Mitra, Rudra, and Vishnu have also been mentioned.

Mandala 2: It primarily focuses on Agni and Indra. It is believed that it was composed by Rishi Gritsamada.

Mandala 3: It contains hymns dedicated to Agni, Indra, and Vishvedevas.

Mandala 4: It mostly talks about Agni, Indra, Rbhus, and Vayu. It is believed that most of these hymns were composed by Vamdeva.

Mandala 5: Many hymns are dedicated to Agni, Indra, Vishvedevas, Maruts, Ashvins, and Varuna. It is believed that most of these hymns were composed by the Atri clan.

Mandala 6: It has hymns dedicated to Agni, Indra, Pusan, Ashvina, etc. The hymns were composed by the Barhasaptya family.

Mandala 7: It contains 104 hymns most of which are dedicated to Agni, Indra, Maruts, and Mitra Varuna. There are also hymns dedicated to River Saraswati.

Mandala 8: Here, the hymns are dedicated to various gods and have been mostly composed by the Kanva clan.

Mandala 9: All the 114 hymns are dedicated entirely to Soma.

So, we see that the Rigveda is one of the most important religious texts of the Hindus. The Rigveda is the oldest of the four Vedas. Most importantly, the teachings contained in Rig Veda are for the benefit of humankind in general. So, one must endeavor to read and understand the Rig Veda.