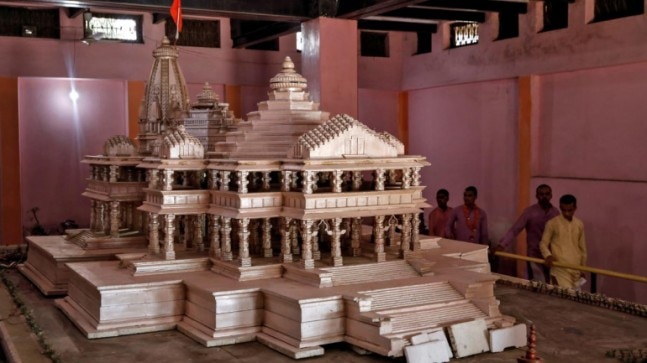 The first meeting of Ram Temple Trust ended after two hours in Delhi’s Greater Kailash – the residence of K Parasaran, senior advocate who was appointed as the head of the trust by the Centre.

In the first meeting on Wednesday, the temple trust has elected Mahant Nritya Gopal Das as president, Champat Rai as general secretary and Govind Giri as treasurer of the Ram Mandir Trust. Apart from that, PM Modi’s close aide Nripendra Mishra has been appointed as the head of the construction committee.

The trust, constituted by the Narendra Modi government after a Supreme Court order, is mandated to oversee the construction of a Ram Temple at the Ramjanambhoomi in Ayodhya.

In the first meeting, the trust was expected to finalise the date to start the construction of the Ram Temple. However, the sources have said that the trust has established a Nirman Samiti (construction committee), which will be led by retired IAS officer, and Prime Minister Narendra Modi’s former principal secretary Nripendra Mishra. “After 15 days, this trust will meet again in Ayodhya, then we will be in a position to announce the date of the construction,” a source in the trust said.

Speaking to media after the meeting, Nritya Gopal Das said, “Logon ki bhavna ka aadar kiya jaayega. Jaldi se jaldi mandir ka nirman hoga [People’s sentiments will be honoured and temple construction will be started soon.]” He also informed that while the main model of the Ram temple will remain the same, efforts will be made to increase its height and width.

It was also decided to open an account in Ayodhya’s State Bank of India branch for donations for the Ram temple construction, Chanmpat Rai told reporters after the meeting.

Among those present at the meeting were the central government representative, additional secretary in Home ministry Gyanesh Kumar, UP government’s representative Avinash Awasthy and Ayodhya District Magistrate Anuj Kumar Jha.

Reacting to the developments at the temple trust meet, BJP president JP Nadda congratulated the three religious leaders on being appointed as the president, secretary and treasures of the trust.

“I salute the entire Sant community, social organisations and the activists associated with the movement and the people of the country, who played an important role in bringing this struggle of 500 years to its final stage. This is a big step towards realising our resolve and feelings towards Ram temple,” JP Nadda said.

The 15-member trust was announced by Prime Minister Narendra Modi in Parliament on February 5. The Shri Ram Janmabhoomi Teertha Kshetra Trust has seven members, five nominated members and three trustees. The trust was formed in adherence to the Supreme Court verdict on the Ayodhya dispute in November last year.

Get real-time alerts and all the

on your phone with the all-new India Today app. Download from