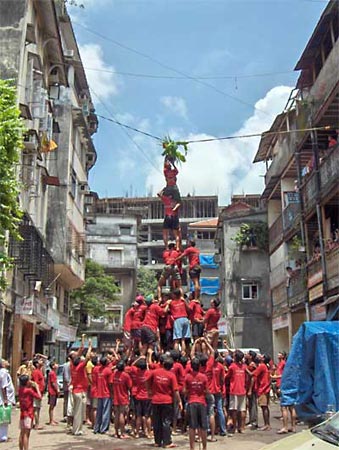 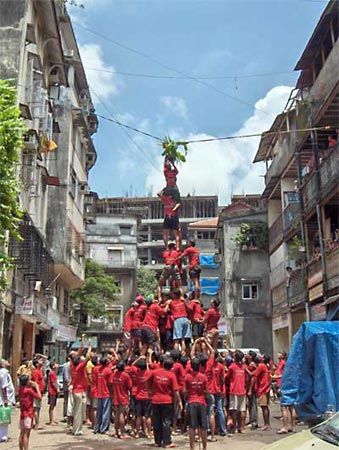 Janmashtami, Hindu festival celebrating the birth (janma) of the god Krishna on the eighth (ashtami) day of the dark fortnight of the month of Bhadrapada (August–September). The number eight has another significance in the Krishna legend in that he is the eighth child of his mother, Devaki.

The occasion is observed especially in Mathura and Vrindavan (Brindaban), the scenes of Krishna’s childhood and early youth. On the preceding day devotees keep a vigil and fast until midnight, the traditional hour of his birth. Then the image of Krishna is bathed in water and milk, dressed in new clothes, and worshipped. Temples and household shrines are decorated with leaves and flowers; sweetmeats are first offered to the god and then distributed as prasada (the god’s leftovers, which carry his favour) to all the members of the household. The devotees of Krishna commemorate the events of his birth by preparing elaborate representations of Mathura, where he was born, the Yamuna River, over which he was transported to safety, and Gokul (ancient Vraja), the scene of his childhood, using small images of the god, the other participants, and the animals and birds of the forest. Pots of milk are hung from tall poles in the streets, and men form human pyramids to reach and break the pots—this in imitation of Krishna’s childhood play with the cowherd boys, when they stole the curds hung out of reach by their mothers. The festival is also a time for group singing and dancing.

This article was most recently revised and updated byMatt Stefon, Assistant Editor.

Your preference has been recorded