Essential Guide to the Gangaur Festival for Women in Rajasthan 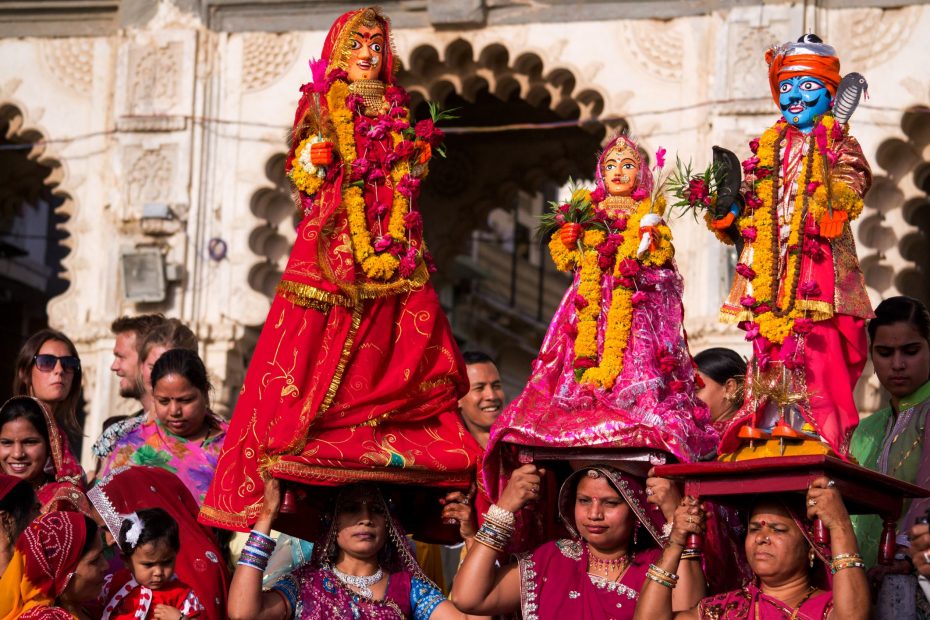 Gangaur is all about honoring the goddess Gauri, and celebrating love and marriage. A manifestation of Parvati (Lord Shiva’s wife), Gauri represents purity and austerity. Married women worship Gauri for the good health and longevity of their husbands. Unmarried women worship her to be blessed with a good husband.

“Gana” is another word for Lord Shiva, and Gangaur signifies Lord Shiva and Parvati together. It’s believed that Gauri won the affection of Lord Shiva through her deep devotion and dedicated meditation to attract him. Parvati returned to her parental home during Gangaur, to bless her friends with marital bliss. On the last day, Parvati was given a grand farewell by her loved ones and Lord Shiva arrived to escort her home.

In 2020, Gangaur will be celebrated on March 27-28. However, festival rituals extend for 18 days and commence the day after Holi.

Gangaur celebrations take place all over Rajasthan and it’s one of the state’s most important festivals.

The most notable celebrations happen in Jaipur, Udaipur, Jodhpur, Jaisalmer, Bikaner, and Nathdwara (near Udaipur).

The festival is predominantly for women, who dress in their best clothes and jewelry, and pray for a husband of their choice or the welfare of their husbands. On the last day, colorful processions of bejeweled images of the goddess Gauri wind their way all over cities and villages, accompanied by local bands.

In Udaipur, there’s a boat procession on Lake Pichola, and fireworks. Women balance several brass pitchers on their heads add to the interest. The occasion ends with fireworks on the banks of the lake. The celebrations extend for three days, from March 27-29, and coincide with the Mewar Festival.

Early in the morning in Jodhpur, thousands of maidens dress up, sing, and carry water and grass in pots.

In Jaipur, the pomp and pageantry of the traditional procession starts out at 4 p.m. from the Zanani-Deodhi of the City Palace. It passes through Tripolia Bazaar, Chhoti Chaupar, Gangauri Bazaar, Chaugan stadium, and finally converges near the Talkatora. Elephants, old palanquins, chariots, bullock carts, and folk performances are all part of it.

Beautiful idols of Shiva and Parvati, to be worshiped during the festival, are made by local craftsmen. They’re brought home and decorated, and placed in a basket with grass and flowers. Wheat plays an important role in the rituals. It’s sown in small earthen pots (kunda) and the wheat grass is used for worship on the final day. Water pots are also decorated with traditional Rajasthani maandna (a special type of painting done with lime water).

All newly married women must fast for the whole 18 days of the festival. Even unmarried women fast and only eat one meal a day, in the hope of finding a good husband. In order to attract Mr Right, in the evening of the seventh day of the festival, young unmarried girls carry clay pots (called ghudilas) with a lamp burning inside them on their heads. They sing traditional Rajasthani folk songs related to the festival and are blessed with gifts from elder family members.

On the second last day of the festival, known as Sinjara, the parents of married women send their daughters sweets, clothes, jewellery and other decorative items. The women dress up in these items and adorn their hands and feet with mehendi (henna), and celebrate with their families.

The festival culminates in Gauri’s departure on the last day, with the breaking of the ghudilas and the immersion of the Gauri idols in water. Women can be seen carrying them through the streets on their heads.

Gangaur is also an auspicious time of year to select a life partner. Tribal men and women get the opportunity to meet and interact, pick there partners, and elope and marry.

Was this page helpful?