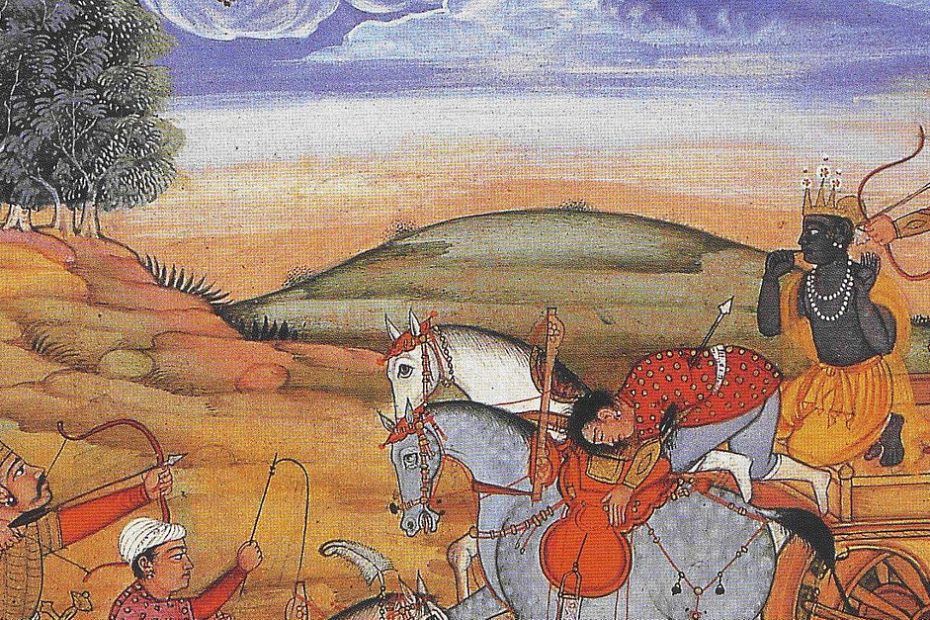 The Bhagavad Gita is an ancient Indian text that became an important work of Hindu tradition in terms of both literature and philosophy. The earliest translations of this work from Sanskrit into English were made around 1795 CE by Sir Charles Wilkins. The name Bhagavad Gita means “the song of the Lord”. It is composed as a poem and it contains many key topics related to the Indian intellectual and spiritual tradition. Although it is normally edited as an independent text, the Bhagavad Gita became a section of a massive Indian epic named “The Mahabharata”, the longest Indian epic. There is a part in the middle of this long text, consisting of 18 brief chapters and about 700 verses: this is the section known as the Bhagavad Gita. It is also referred to as the Gita, for short.

The Bhagavad Gita was written at some point between 400 BCE and 200 CE. Like the Vedas and the Upanishads, the authorship of the Bhagavad Gita is unclear. However, the credit for this text is traditionally given to a man named Vyasa, who is more of a legend than an actual historical figure; because of this, Vyasa has been compared to Homer, the great figure of ancient Greek epic poetry.

The Gita was written during a time of important social change in India, with kingdoms getting larger, increasing urbanization, more trade activity, and social conflict similar to what was happening when Jainism and Buddhism developed. This ancient Indian text is about the search for serenity, calmness, and permanence in a world of rapid change and how to integrate spiritual values into ordinary life.

Around the time when the Gita was written, asceticism was seen in India as the ideal spiritual life. Ascetics from different sects along with Jains and Buddhists all agreed that leaving everything behind (family, possessions, occupations, etc.) was the best way to live in a meaningful way.

You were never born; you will never die. You have never changed; you can never change. Bhagavad Gita

The Bhagavad Gita revolves around the following questions: How can someone live a life spiritually meaningful without withdrawing from society? What can someone who does not want to give up family and social obligations do to live the right way? The Gita challenges the general consensus that only ascetics and monks can live a perfect spiritual life through renunciation and emphasises the value of an active spiritual life.

The plot of the Gita is based on two sets of cousins competing for the throne: The Pandavas and the Kauravas. Diplomacy has failed, so these two clans’ armies meet on a battlefield in order to settle the conflict and decide which side will gain the throne. This is a major battle and it takes place in Kurukshetra, “the field of the Kurus”, in the modern state of Haryana in India.

Arjuna, the great archer and leader of the Pandavas, is a member of the Kshatriyas caste (the warrior rulers caste). He looks out towards his opponents and recognizes friends, relatives, former teachers, and finally reasons that controlling the kingdom is not worth the blood of all his loved ones. Emotionally overwhelmed, Arjuna drops down, casting aside his bow and arrows and decides to quit. He prefers to withdraw from battle; he prefers inaction instead of being responsible for the death of the people he loves.

His chariot driver is the god Vishnu, who has taken the form of Krishna. Krishna sees Arjuna quitting and begins to persuade Arjuna that he should stick to his duty as a warrior and engage the enemy. The Bhagavad Gita is presented as a conversation between Arjuna and Krishna, a man and a god, a seeker and a knower.

The Message of the Bhagavad Gita

Arjuna is worried about entering the battle and destroying his own family, so Krishna begins by explaining five reasons why Arjuna should not be troubled by this. Essentially Krishna shows Arjuna why he will not get bad karma from taking part in the war.

The first reason Krishna mentions is that because atman (the self) is eternal, it is a mistake to think that one can actually kill someone. What actually happens is that people are sent to the next stage of reincarnation.

Another reason why Arjuna should fight is because of honour and duty, also referred to as dharma or cast duty. Arjuna is a member of the warrior class; the battle is the very reason of his existence. It is not sinful to fulfil your duty in life.

The third reason Krishna gives is that inaction is impossible. Withdrawing from battle is in itself a conscious decision; not choosing is still a choice. This is in a way a criticism of some world-views, such as asceticism, which claim that leaving everything behind is inaction: Withdrawing from society is always a deliberate act.

Another reason given by Krishna is that the source of evil is not in actions, but in passion and desires, the intentions behind the actions. This brings the dialogue to the last reason. by Steve Jurvetson (CC BY)

The fifth and last reason is that there are ways to act where we can do what we have to do without getting bad karma. In the Bhagavad Gita, Krishna explains three ways.

The first way is Jnana yoga (the way of knowledge). This idea is based on the Upanishads and holds that life and death are not real. Selfhood is nothing but an illusion. All we see are manifestations of the oneness. Once we realize that the oneness is behind all things, we can escape the bad karma from acting.

[Krishna speaking] I am ever present to those who have realized me in every creature. Seeing all life as my manifestation, they are never separated from me. (Bhagavad Gita 6:30)

The second way is Bhakti yoga (the way of devotion). This in an idea developed in great detail in Hinduism and holds that our actions can be dedicated to Krishna by surrendering our will to him, and he will take upon himself any bad karma.

The third way is Karma yoga (“the way of action” or “the way of works”). The idea behind Karma yoga is acting without attachment; in other words, to act without being so concerned about the outcome of our actions. According to this view, if we act in such a way as not to get attached to the fruits of our actions, we can be more effective. Sometimes emotions like fear, embarrassment, or anxiety can interfere in the outcome of what we do.

[Krishna speaking] Neither agitated by grief nor hankering after pleasure, they live free from lust and fear and anger. Established in meditation, they are truly wise. Fettered no more by selfish attachments, they are neither elated by good fortune nor depressed by bad. Such are the seers.” (Bhagavad Gita 2:56-57)

Each of these three ways to act without getting bad karma is suitable for different people or castes. Priests would follow the way of knowledge; peasants, merchants and commoners might be inclined to the way of devotion; warriors would identify themselves with the way of action. Finally, Arjuna decides to obey Krishna by engaging in the battle and in the end the Pandavas regain control of the kingdom. The Influence of the Bhagavad Gita

No other Indian text has attracted more attention from foreigners than the Bhagavad Gita. Important figures such as Mahatma Gandhi held the Gita as their main reference book.

The physicist Robert Oppenheimer watched the massive explosion and blinding flash of the mushroom cloud of the first atomic bomb test in New Mexico. Oppenheimer then claimed that when he saw that, two verses from the Gita came to his mind:

If a thousand suns were to raise in the heavens at the same time, the blaze of their light would resemble the splendor of that supreme spirit. (Bhagavad Gita 11:12)

This ancient book which contains a message that could be considered either distressing or inspiring still addresses some of the concerns we have today, and its message has spread all over Asia and across the globe.