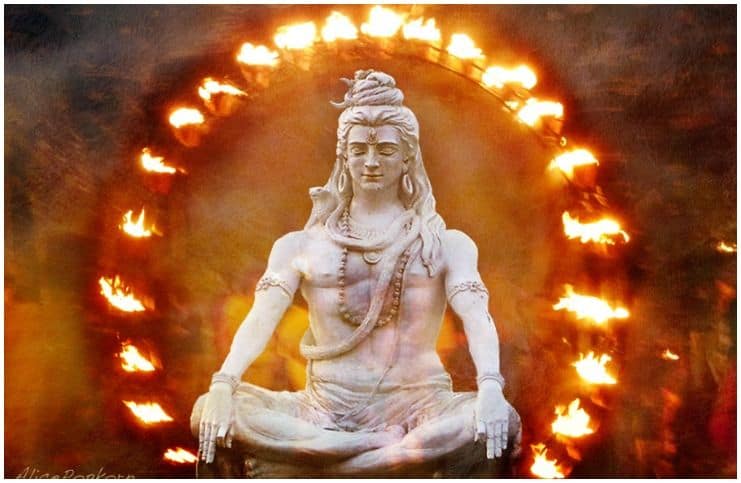 Here Is A Complete List Of Hindu Gods And Goddesses:

Aditi is the personification of the infinite and mother of a group of celestial deities, the Adityas. She had 12 children which are called the twelve sovereign principles:

He is equally the fire of the sun, of lightning, and of both the domestic and the sacrificial hearth.

Ardhanarisvara is an androgynous Hindu deity consisting of Lord Shiva and his consort, Parvati.

This Hindu deity represents the inseparability of the feminine aspect of the divine with the male principle of God.

Lord Ayyappan is a Hindu deity who is believed to have been born out of the union between Shiva and the mythical enchantress Mohini.

He is known as the elder brother of Lord Krishna. Occasionally, Balarama is considered one of the 10 avatars of the Lord Vishnu, particularly among members of Vaishnava sects.

According to Hindu mythology, Balarama and Krishna were originally conceived in the womb of Devaki.

He is said to be the creator of the whole universe. According to Hinduism and Hindu mythology, Lord Brahma is one of the three major gods of Hindus.

The other two gods are Lord Vishnu and Lord Shiva. The Hindu tradition states that Brahma had 5 heads.

Brihaspati is the preceptor of the gods, the master of charms, hymns, sacred wisdom, and rites, and the sage counselor of Indra in his war against the Titans.

In addition, Brihaspati is in charge of the stored energy from sacrifices made by humans.

Chandi is a form of Durga. This form is said to be inaccessible and extremely ferocious because of her anger.

She is known by various names, such as Abhaya (“She Who Is Without Fear”) or Mahamaya (“Great Magic”).

She is one of the goddesses in Hinduism and is a form of Devi, the supreme goddess. Durga is occasionally referred to as Durgatinashini, that literally translates into “the one who eliminates sufferings.”

In Sanskrit, Durga means “a place which is difficult to overrun” or “a fort,” or an apt metaphor for this deity’s protective nature. According to legend, Goddess Durga was created for the slaying of the buffalo demon Mahisasura by Vishnu, Brahma, Shiva, and the lesser gods.

Durga is usually seen as a warrior woman riding a tiger or a lion with 8 or 10 hands carrying weapons and assuming mudras. The festival of Navratri celebrates 9 nights dedicated to the 9 divine forms of Durga.

He is the Elephant God of Hinduism and is commonly described as the remover of obstacles.

Interestingly, Ganesha also places obstacles in the path of those who need to be checked. Additionally, Ganesha is known by the names Ekadanta, Ganapati, Pillaiyar, Vinayaka, and Heramba.

This special deity signifies the oneness and universal unity of Shiva and Vishnu, as manifestations of the supreme soul.

He is one of the main gods of the Rigveda and is the Indo-European cousin of the Norse Odin, German Wotan, Roman Jupiter, and Greek Zeus.

Before each battle, Indra drinks a vast quantity of soma that makes his belly enormous.

Jagannath is considered a form of Vishnu. He is a part of a triad along with his sister Subhadra and brother Balabhadra.

Kali is the Hindu goddess of time, death, and doomsday and is typically associated with violence and sexuality but is also considered a strong mother-figure.

Kali is described as blue or black, partially or completely naked, with multiple arms, a long lolling tongue, a necklace of decapitated heads, a skirt or girdle of human arms, and a decapitated head in one of her hands.

Kalkin is the final avatar of the Hindu god Vishnu, who is yet to appear.

According to Hinduism, Kalkin’s arrival on earth will mark the end of the Kali Yuga, the 4th and final stage in the history of the universe.

He is worshipped as the 8th avatar of Lord Vishnu and also by some as the supreme God in his own right.

There are about 108 names of Lord Krishna amongst which the popular ones are Govind, Gopal, Mohan, Devakinandan, Ghanshyam, Shyam, Girdhari, Hari, and Baanke Bihari.

He is the god of money and wealth. Kubera is associated with the mountains, earth, all treasures such as jewels and minerals which lie underground, and riches in general.

Kurma is one of the 10 avatars of the Hindu god Vishnu.

His enormous back was said to have provided a foundation for the mythical Mount Mandara, that was used by the gods as a churning rod to stir the primordial milk-ocean.

Lakshmi is one of the most popular goddesses of Hindu mythology and is known as the goddess of purity and wealth.

According to the Hindu tradition, the goddess was in the world, bestowing fortune and favor on the other gods.

Matsya is one of the 10 avatars of the Hindu god Vishnu.

According to Hindu mythology, Lord Vishnu appeared in the form of a fish during the Satya Yuga to save the totality of living beings from a great flood.

He is the god of oaths and friendship. Furthermore, Mitra is a negotiator for the men and gods.

He also represents harmony, integrity, and all else that is important in the successful maintenance of order in human existence.

Narasimha is one of the 10 avatars of the Hindu god Vishnu.

According to Hindu mythology, Narasimha’s half-man, half-lion appearance allowed him to circumvent the boon received by the demon king Hiranyakashipu which he could not be killed by any animal or human.

Nataraja is the dancing form of Lord Shiva, as Nataraja Shiva dances away the illusory world of Maya transforming it into enlightenment and power.

Parashurama is one of the 10 avatars of the Hindu god Vishnu.

He, along with Indrajit and Hanuman, is considered to be one of the very few Atimaharathi ever born on Earth.

Parvati is a family Goddess, known for her wifely devotion to Shiva.

She is the mother of Hindu deities Kartikeya, Ganesha, and Ashokasundari.

Lord Rama is the hero of one of the most well-known books of Indian culture: The Ramayana.

She is the beloved Hindu goddess of music, knowledge, and arts.

Shashthi is a Hindu folk goddess, venerated as the protector and benefactor of children.

In addition, Shashthi is the deity of vegetation and reproduction and is thought to assist during childbirth and bestow children.

He is the 3rd god in the Hindu triumvirate.

Lord Shiva is commonly depicted as having a temper but is mostly seen in a meditative state.

Shiva is accountable for the destruction of the world.

He is also the teacher of Yoga to sages, and the Lord of Yogis.

Varanasi is considered to be the city specially loved by Lord Shiva.

Skanda, also known as Kartikeya, Murugan, Subrahmanya, and Kumara, is the Hindu god of war. He is the son of Goddess Parvati and Lord Shiva.

Surya is both the Sun and the Sun god. Surya is depicted as a red man with four arms and three eyes, riding in a chariot drawn by 7 mares.

Vamana is the 5th avatar of Hindu god Vishnu.

Vamana incarnates in a time of crisis to restore cosmic balance by creatively defeating the Asura king Mahabali.

Varaha is the 3rd of the 10 incarnations of the Hindu god Vishnu. Varaha appeared in the form of boar during the Satya Yuga.

Varuna is the ruler of the sky realm and the upholder of the cosmic and moral law.

Vasudeva is worshipped as the 8th avatar of god Vishnu and also by some as a supreme God in his own right.

Vishnu is the 2nd god in the Hindu triumvirate. He is the preserver god, that means he protects the earth from being destroyed and keeps it going.

Vishvakarman is the architect of the gods. Also, Vishwakarma is the designer of all the flying chariots of the gods.

Yama is the god of the dead. Yama is also called Sarvapranahara, Kala, Antaka, Mrityu, and Dharmaraja.

His assistants are said to be the Yamdutts, the demons that torture the souls which come to Naraka because of their deeds.

In Buddhism, Yama is the Lord of the Underworld.

The Mahābhārata depicts the God of Death as holding a noose with which to bind the souls of the dead. and clothed in red with glaring eyes.