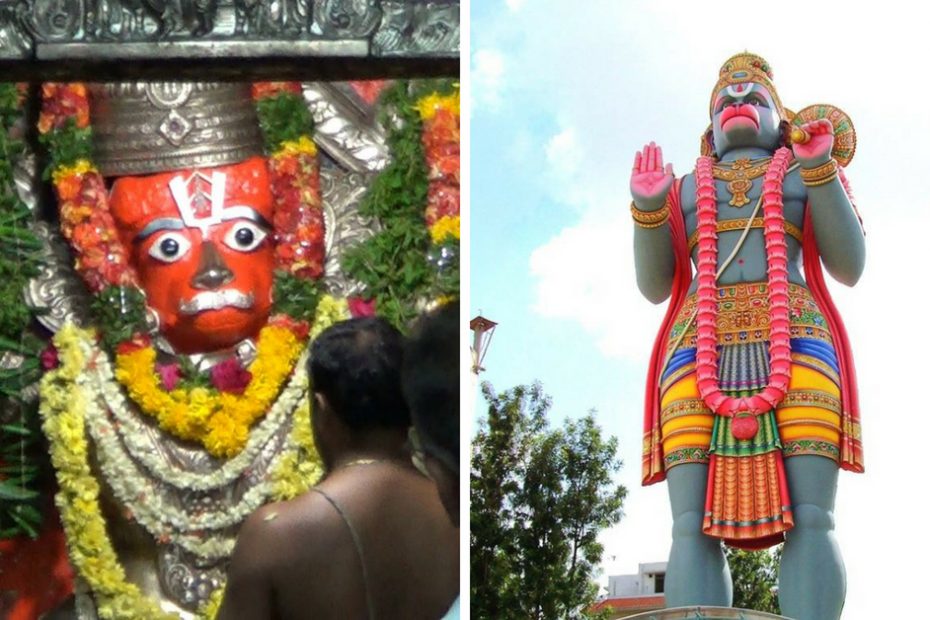 Temples and spiritual centers have always been a part of every city in India blended and infused in its own rooted culture. Here, we have temples for every Gods and Goddess owing to different kinds of human well being. If Saraswathi is for Wisdom then we have Lakshmi for wealth; likewise, the culture has been built to keep the spiritual process alive in the country. In this context, Lord Hanuman becomes relevant for a reason that we worship him to free us from the distractions of Kaliyug. With Saturday being considered as the day of Hanuman coupled with Shraavan coming into place, here we are with the list of popular Hanuman temples in Bangalore on today’s read.

Being one of the popular attractions of the city, Sri Prasanna Anjaneya temple hosts the gigantic idol of Lord Hanuman; 22 feet in height and 16 feet in width. One of the most spectacular events is the “Benne-Alankara” (Butter decoration) which is usually conducted in August, during which the gigantic idol is decorated with more than 500 kg of butter (which is donated by thousands of devotees). A temple dedicated to Lord Hanuman is located on your way to Mysuru road. It is said that the temple celebrates the glory of 600 years with the statue of Hanuman here is installed by a Hindu Saint, Sri Vyasa Raja. Blessed with a tall tower, spacious inner sanctum, this Hanuman temple is one of the main attractions of the city.

Where: Mysuru Road, Near Attiguppe, Bengaluru. This is said to be a powerful abode of Hanuman blessed with a splendid architecture. The temple is known for its rituals and Aaradhanas. A divine space which has witnessed miracles of every kind is a must-visit in the city. This temple is on a hillock. It is believed that the hillock that hosts the main deity of Sri Prasanna Anjaneya Swamy was formed from a heap of ragi (millet) and hence the name ‘Ragigudda’. It is a beautiful temple with good scenery around. The temple also hosts a Shivalinga along with Rama, Sita, and Lakshmana. Apparently, over a hundred years old, this temple has a very strong positive energy which you feel as you enter the sanctum. It is well managed to make it a vibrant spiritual center of the city. It is very popular in the city and when you are nearby, you got to visit this. This is the tallest Hanuman statue you see in Bengaluru. The temple compound has a huge banyan tree making a peaceful space for devotees. The gigantic statue of Hanuman is a fiesta to look at and it is simply a spectacular sight. Here, you see a 12 feet idol of Lord Hanuman. A serene place maintained by Isckon purohits. As the name says, Anjaneya in his all Alankaar looks so wonderful that you just lose yourself in his presence. This is an age-old temple whose history dates back to the times of Kempegowda. It was built by Kempegowda and is named after the Yelahanka gate of the Bangalore Fort. A beautiful temple without a second thought. This is one of the popular Hanuman temples of Bangalore which has a historical importance. The idol of the lord is facing towards the North with an approximate height of 16ft – considered to be one of the tallest ones in the city. Here, you see ‘Choodamani’ in the hands of Hanuman depicting a scene from Ramayana. The temple stands on the Karanji lake which existed then, and hence the name Karanji Anjaneya Swamy temple. As the name suggests, Harake (A unique prayer to the Almighty God) is the most attractive thing in the temple here. It is a divine space which hosts the idol of Hanuman which is quite a big in size compared to rest. The most attractive spot in the temple premises is the 17-19 feet tall Anjaneya statue. It is a masterpiece indeed. Panchamukhi Anjaneya here has five heads; Varaha, Garuda, Narasimha, and Hayagreeva. So, this was the list of Popular Hanuman temples in Bangalore. If we have missed any then please contribute in the comments below.